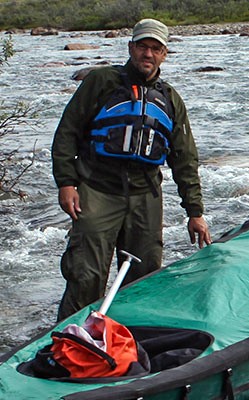 I intend to maintain Tincup Wilderness Lodge as the treasure it is today, a place of peace and harmony set in the midst of nature’s unspoiled beauty. I am most grateful to Jose and Larry and I deeply respect what they have created.

Tincup from day one

The desire to descend from 6,000 feet and land on the silvery waters of Tincup Lake was overwhelming. I had found the perfect location for a fly-in lodge. Its main appeal, to my mind, would be to nature lovers, though fishing was an important mainstay in those early years. This was summer 1969.

The lodge had an unusual but practical design: in addition to its nine bedrooms, it had a tackle shop, bathrooms, a first-aid room and eight hundred square feet of carpeted lounge area featuring a circular fireplace, a pool table, a bar and a stage for a professional two-piece band.

Nature’s abundance of flora, fauna, and fish began right at the front door. Guests with guides headed out daily by boat, airplane, and helicopter. The lake always yielded up its bounty whether from the deep, the shallow or the shoreline. Guests helicoptered to inaccessible grayling streams, or to high meadows to experience limitless expanses of mountain grandeur, flowers, birds, animals and clean fresh air. The Widgeon provided swift access to other lakes, as well as a breathtaking view of glacier mountain ranges as it flew guests between Whitehorse and Tincup. A Seabee amphibian airplane served as a standby backup, and a ski-equipped Piper Cub provided access during the winter.

Putting the pieces together

Construction of the lodge facility is a story well worth telling. All the materials and furnishings were landed on the ice in one DC-3 load and thirteen Otter loads. Once the ice had melted, the Widgeon went to work. The helicopter carried in bulky loads, such as the electronic organ.

The new lodge building we had in mind required about 450 logs. Gerry Couture, project manager and future partner, actually hauled all these logs along ice-covered Tincup Creek to the lodge site using his four sleigh dogs, a formidable achievement. Then the logs had to be peeled. Two exceptionally talented log builders from Burwash Landing, Jimmy Enoch and Thomas Joe, plus three helpers, made up the building crew. The quality and speed of the work that followed was truly remarkable. Their effort was nothing less than heroic. The lodge was completed and ready for its first group of guests a full day ahead of their arrival.

Forty-six in all took part in the Tincup experience over two seasons. They came from as far away as Singapore. Most were Americans from such states as Texas, Oklahoma, Iowa, Ohio, New York and Pennsylvania. One couple arrived from Quebec City, and another couple visited from Calgary. A number of these guests came back for the second season, such as a famous nature photographer (a National Geographic contributor) and his son, who came for a few weeks both years. A Texas-based outdoor TV photographer/programmer did a piece on our unique use of the helicopter, and one guest even stayed and joined the staff.

The end of the dream

In these first two seasons the fly-in lodge on Tincup Lake had delivered beyond all expectations. In 1972, an unfortunate chain of events meant turning over this little piece of paradise to the next visionary.

The Yukon Government released the property to Mr. Jack La Fave in 1975 and, after completing additional room capacity to the main lodge, he ran the operation very successfully for another 6 years.

In 1981, Jack and two others flew to Tincup Lake and started making preparations to open for another season. He lit a fire in the big pot-belly stove in the lodge and then focused on starting the Deutz generator in the nearby shed. The generator portion had been overhauled that winter, so Jack spent about half a day focused on getting the machine put back together and the engine started. Unbeknown to Jack, the stovepipes had separated during the winter and sparks from the fire in the pot-belly stove had ignited the floorboards of the upper level. When the generator was finally started it laboured very hard, so Jack set about shutting switches off trying to isolate the problem. After a few minutes he realised that all was well in the generator building, so he went to the lodge to shut off the lodge main panel box so he could see if the problem was with the wire running to the lodge. When he opened the door to the front of the lodge, he realised it was full of smoke. He closed the front door and went around to the back of the lodge hoping to find its source. The smoke was so thick that he could not even crawl down the rear hall, so he left the rear door open and went back around to the front. When he opened the front door the second time, all the windows in the main lodge blew out and within second flames were leaping out of the building. Without his water pump set up, Jack could do nothing but watch his lodge burn to the ground. Within a few minutes it started to rain outside, so the damage to the surrounding area was minimal.

The fire happened on Thursday afternoon June 10, 1981 and the resort was to open Saturday June 12. We had 27 guests booked and 22 of them were already en route to Whitehorse. We were able to contact a group of five that were flying to the Yukon in their own aircraft. We were able to cancel their visit. The other 22 were on their way to the Yukon so we could not contact them until the next evening when they were in Whitehorse. All 22 of them still wanted to go fishing, so we set up on Wellesley Lake with a tent camp and everyone had a great week. A bit rougher than Tincup, but all in all, everyone had a great time.

The property then sat idle till 1986, when Larry Nagy purchased the 4-acre plot from Mr. La Fave. The following year, Larry hired Dave Barrett to cut down the willows and remove the burnt-out remains of the old lodge. In 1989, Larry purchased a Pan-Abode-designed lodge building and chartered 3 helicopters from Al Kapty at Trans North Helicopters to fly in the materials required to build the new lodge.

It took 3 Bell 206 helicopters a day and a half to transport 91 loads of cedar logs and materials from Mile 1,118 on the Alaska Highway to Tincup Lake. The following year, Larry purchased a Beaver airplane on floats and flew in the materials to build 3 duplex cedar log cabins, which required another 315 loads, also from Mile 1,118. Tincup Lodge became fully operational again by 1992 and, with the assistance of his partner Jose Janssen, the lodge operated continuously from June to September every summer until 2010, when it was sold to Mr. Meinrad Humm from Switzerland.

Because of the natural beauty and serenity of Tincup Lake, the Lodge enjoyed the company of many repeat guests, including Chris Tarrant from London, England. Martha Stewart filmed part of her vacation show in 2002 at the Lodge and claimed the location was as close to paradise as one could get on Earth!

Tincup Lake is a magical place – and will always remain one. Once visited, never forgotten.

Meinrad Humm acquired the Lodge in 2010.

Many thanks to all for their contributions.

Photo Gallery
Tincup Wilderness Lodge is a member of